Bordering Mexico in four states, it is no surprise that the U.S is Mexico’s largest trade partner, in fact according to World’s Top Exports, in 2019 the U.S accounted for 76% of Mexico’s total exports- worth $358.9 billion. Therefore, it is imperative that the relationship between the two countries remains intact, not just for the Mexican economy, but for the U.S’ too. For the first time, in 2019 Mexico acted as the States’ largest trade partner, with $614.50 billion worth of exports being bought by the neighboring country, $2 billion more than Canada, who came second. In 2016 however, this relationship was to be tested with the appointment of Donald Trump as President. Unhappy with the illegal immigration of Mexican nationals into the southern states, Trump decided to initiate action, with perhaps his most famous and controversial idea- The Wall. As expected, the controversy had a big impact on the Peso.

Background on the Peso

‘The Mexican peso (MXN) ranks as one of the top 15 most traded currencies in the world. It is third in the Western Hemisphere, behind only the U.S dollar and the Canadian dollar.’- Investopedia. This statistic shows the importance of the Mexican currency, first introduced in 1866. The currency is so popular with traders as the CNBC claims ‘for many years the peso had been considered an emerging market proxy — it tends to move depending on what’s happening in other developing nations, not just on what’s occurring at home.’ If a trade partner is anticipated to perform below expectation, the peso will fall as a result. The peso is highly liquid and seen as extremely easy to trade, which is also a cause of its high demand. Against the Dollar, the Peso is a weak currency with currently ₱1 worth the equivalent of $0.05. Below the exchange rate for the ₱: $ is shown. 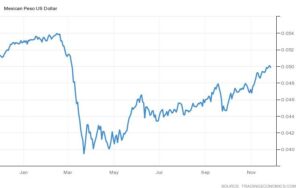 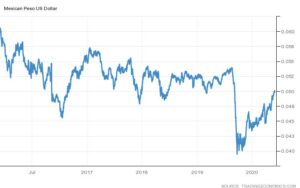 In 2020 the Peso has been experiencing its first period of long term appreciation since the start of 2017, following a crash that resulted in a loss of nearly 28% in value against the Dollar. Ultimately the peso began to fall in 2014, following a fall in oil prices. These oil prices directly affected Mexico’s Balance of payments and weakened the currency.

Since Donald Trump announced his plans to build a border wall between Mexico and the USA if he was elected as president, the Peso began on a journey of constant decline. Fears over a fallout with one of the largest economic powerhouses in the world led to traders pulling out of investing in the Peso, reducing its value. Throughout the election, there was a direct negative correlation between Trump’s poll numbers and the peso’s value, with every republican vote causing a peso decline. Traders saw President Trump as such a significant problem for the currency, that it led to a huge depreciation, with the peso depreciating by 13% in the next three days, and being the second worst performing currency other than the Lira in the following months. The peso was quickly becoming a currency not determined by emerging markets anymore, but by American politics, the CNBC suggested in 2017.

In this same year however, the Mexican currency turned a corner, experiencing major appreciation for the first time in over three years. Fear over Trump had weakened, with renegotiations of the North American Free Trade Agreement (NAFTA), which previously Trump was expected to attack. A weak Dollar also had its part to play in this, with the American national currency performing at its lowest in years.

Until 2020, the peso flattened out its long term trajectory, experiencing minor depreciations and appreciations, only gaining a small increase from ₱1: $0.051 ₱1: $0.053 (December 2017- December 2019). The peso’s situation started to go downhill again however, after a crash in February and March 2020, with the currency tumbling against the Dollar. Oil prices once again fell, leading to poor economic performance, only further fuelled with COVID-19.

Despite this, with the 2020 U.S elections, Democratic Joe Biden victory provided the necessary grounds for the peso to recover, which it did. Donald Trump proved such a threat to the currency that Brendan McKenna, a strategist at Wells Fargo (New York) said to Bloomberg that Biden win ‘takes pressure some uncertainty off Mexico even though Donald Trump wasn’t targeting them this time around’ adding that he ‘feels good about the peso.’ The numbers certainly justify this feeling, with the peso increasing in value from 0.039 to 0.05- March 23rd to present, a significant boost of 28.2%. In such a volatile and liquid currency, the unpredictability of Donald Trump in the past put Mexico under constant threat, with the Mexican peso seeming breathing a huge sigh of relief.