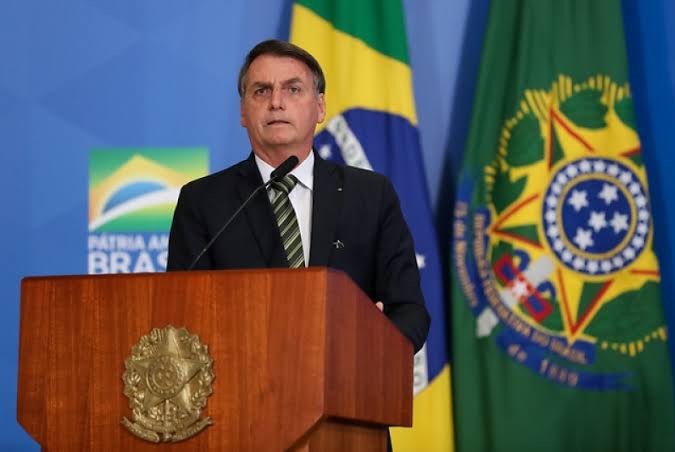 Brazil boasts the largest economy in South America and the eight largest in the world as one of the BRICS nations. Brazilian Real, being one of the top twenty most traded currencies in the world, has had its difficulties in 2020. Following a great end to 2019, the national currency took a turn for the worst overnight. It immediately found itself in a state of freefall from January 1st2020, a depreciation that the Real would find itself in until May 13th 2020. Here it found itself a short relief and a glimpse of hope for the rest of the year.

However, this would not be enough to recover from the worst performance of an emerging market currency during the first quarter of the year as the Real struggled to keep the upwards momentum. The key questions to be asked here are: how did the Real find itself in such a negative position from the first day of the year? And did Brazil struggle to maintain the rebound occurring during May? The graph below shows the exchange rate between the Real and the Dollar. 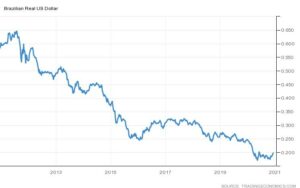 In the last five years, Brazil has faced immense political pressure with the previous three Presidents involved in Operation Cash war, involving state owned oil company Petrobras allegedly ‘accepting ‘bribes from construction firms in return for awarding them contracts at inflated prices.’ When the last three Ex-Presidents have been accused of corruption, and the current President’s (Jair Bolsonsaro) son is charged with corruption, it is not likely to give investors faith in the country. Adding to this, Brazil’s handling of Coronavirus has been poor, with Bolsonaro under extreme criticism of his refusal to accept any responsibility. The Real has suffered along with the currency on a long term depreciation in the last decade.

Simply put, a mix of poor economic performance, a political crisis, and a virus pandemic have led to the poor performance of the Real this year. The COVID situation has been a common factor in all negatively performing world currencies this year. For the Brazilian Real, it is the other two factors that are the unknown causes of the currency’s depreciation.

Brazil is on the brink of another recession when Jair Bolsonaro took over. The country had not moved forwards economically in six years and despite Bolsonaro stating in the elections he knew nothing about economics, people were excited about the potential growth that could occur with businessman Paulo Guedes appointed Minister of Brazil’s economy. This optimism was soon hampered, with further political tensions and government failures causing realization the upturn wouldn’t occur anytime soon.

As per Bloomberg, the severe economic pressure had a significant effect on the Real, policy makers sold $3 billion in foreign-exchange swaps in early 2020 in three separate auctions. The intervention, however, did little to ease pressure on the currency, which is being dragged down as traders increase bets authorities will reduce borrowing costs following the Federal Reserve’s emergency rate cut’.

The short lasting rebound and forecasts for 2021

After posting a record low value against the Dollar in early May 2020, the Real had a short rebound increasing in value by 20% in just one month. On the surface this seemed highly positive, however according to a report by Focus-economics, this rebound was mainly a reaction to countries lifting lockdowns and the markets improving in ‘market sentiment’. The report also goes along to say that the Real became favorable to ‘riskier assets’ after expansionary fiscal and monetary policies were implemented across the globe, including in Brazil. Contrary to expectations, the improvement was not to stay with the currency quickly returning to the norm, depreciating again from $0.207 on June 8th to $0.168 on June 18th. The honeymoon period of reopening markets around the world had faded, and the negative economic and political situation in Brazil loomed over once again.

Throughout the rest of 2020 to the present day, the Real has managed to stay relatively level, currently holding a valuation of $0.194. Expectations of a second COVID wave hindered any further upwards trajectory, but a booming commodities sector kept the currency afloat.  In fact, it is expected that the Brazilian Real will start off 2021 the opposite way it kicked off this year, by growing in value and surpassing the $0.200 mark. These expectations of CIBC economists are due to fiscal and administrative reform.