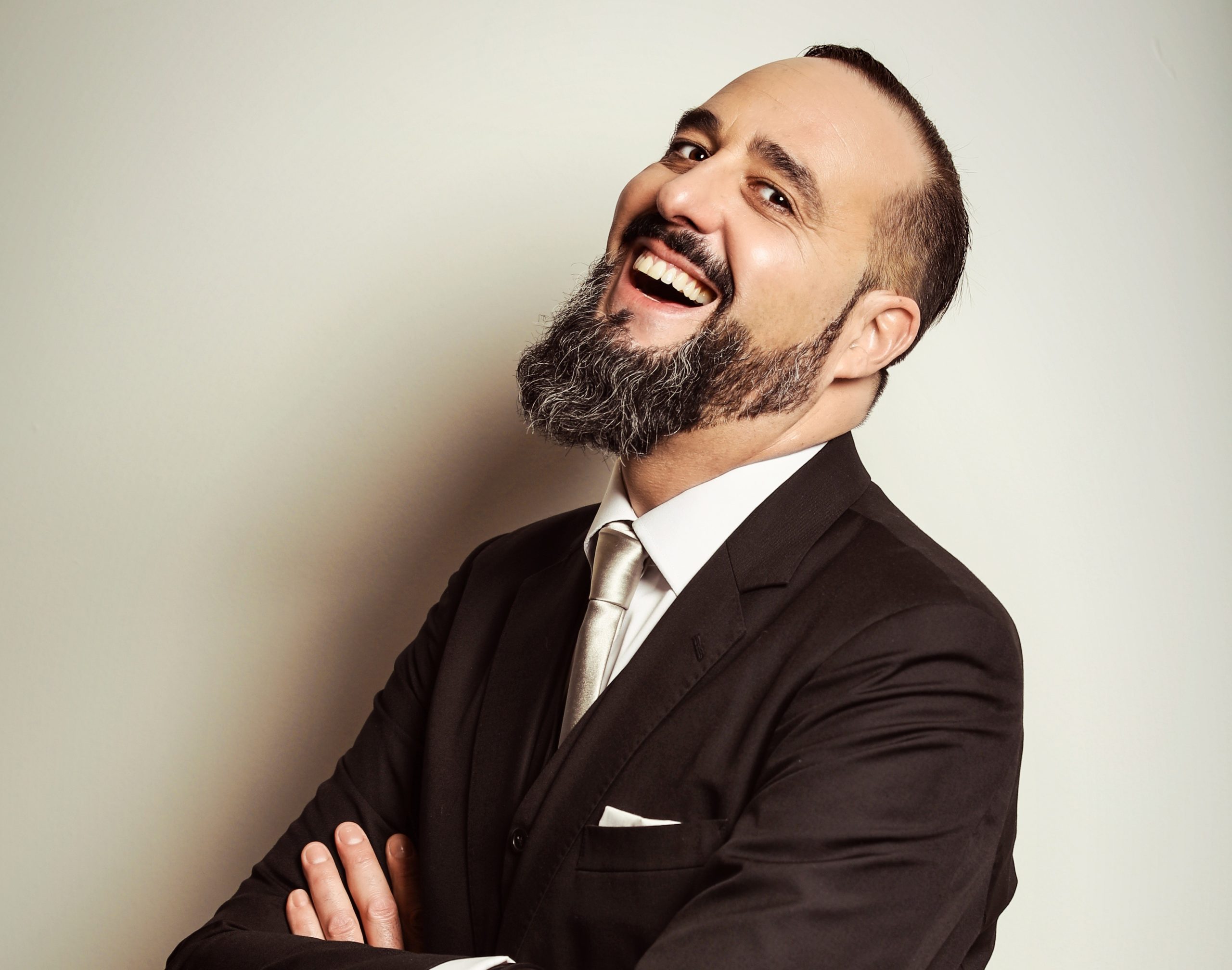 This VIP interview series has quite good track record of finding TedX speakers and industry thought leaders. German Ramirez is not an exception, as he is one of the movers and shakers of our domain. Ladies & Gentlemen, dear readers, Fyggex community proudly present: Digital, Social media & Blockchain Pioneer, Award winning Branding & Marketing Expert and Serial Entrepreneur and author German Ramirez thoughts about his experiences with blockchain start-ups, digital transformation and innovation.

Fyggex: Thank you for joining us German, you have an interesting history of building start-ups. Can you tell our audience bit of them?

German Ramirez: I started in the space of emerging technology, which back in those days was the e-commerce aspect of internet, far before Google was founded. It was very early, and there wasn’t much adoption. The start-up I had joined that eventually crashed. Learnings from it motivated me to create a start-up by myself. We were in the field of mobile technologies, which was the next big wave after the early internet boom. My first mobile project was in the year 2000 and consequently my first blockchain project was in 2013.

Fyggex: 2013 was quite early days in Blockchain space, you have good memories of that era?

German Ramirez: We had the idea to use cryptocurrencies as a vehicle for remittances. The first product we launched was a crypto ATM, made in Europe with our own hands. The idea was to disrupt the market, which was at that time dominated by large companies such as Western Union. They charged upwards of 10 per cent for moving money from one place to the other, and it took several days to do that. The remittances market was obviously affecting those who needed it most.

To address the challenge, we created a series of physical terminals. As a consequence, someone who wanted to send money to their family in India would be able to put £300 in a machine in London, and fifteen minutes later cash out Rupees from the equivalent kiosk in Delhi. As a user, you got your problem solved. It was using cryptocurrencies, but you wouldn’t have known as a user. Behind the scenes, money was going into Bitcoin, then settling. It cut the time needed from days to minutes, and the cost from 10 per cent to 1 per cent. Unfortunately it was a too early to invest in cryptocurrencies, as the proper token economy didn’t exist.

Fyggex: Today you’re co-founder of The Relevance House. What does it do?

German Ramirez: We’re a Swiss based, full service, communications agency specialising exclusively in blockchain and emerging technologies. We’ve methodologies to accelerate growth with a significant knowledge advantage in this space, because it’s relatively complex and a lot of it is changing extremely rapidly.

Being focused allows us to understand what we’re talking about, and support companies. We work primarily with young companies and start-ups, helping them through brand building strategies.

Fyggex: Alongside this, you’re a much sought-after speaker for conferences and universities. You must enjoy sharing blockchain knowledge?

German Ramirez: I’ve been doing public speaking for 25 years. I have a passion for technology and a passion for storytelling. My first keynote speech was about blockchain in a conference called ‘The Future of Money’ back in 2014 where people were looking at me puzzled trying to understand what I was talking about. Having seen how many more people are dragged into this movement is very interesting. This won’t surprise you, but there’s a direct correlation between the price of cryptocurrencies and the amount of people interested in blockchain technology.

Fyggex: How much is about preaching, and how much about removing ‘fake news’?

German Ramirez: They’re one and the same. You can’t convey the right understanding of something without debunking the myths. I try to separate it into three sections. Firstly, there is blockchain technology, which is basically a distributed ledger. I call it the internet of transactions. Then, there’s what I call the blockchain mindset, which has to do with decentralisation and empowering people. One is the brain, the other the belly, and finally the rest is the heart.

Fyggex:  You have Spanish/Latin American heritage too. Do you have any perspective how blockchain matters are developing over there?

German Ramirez: I’m from Spain with a Latin background, yes. The news from El Salvador (that blockchain is legal tender) is encouraging. When you think about the volatility of their currencies, I think they see a possibility to present themselves as innovative. But a discussion we’ll have down the line is ‘who cares?’

There’s a certain risk with central banks. The risk is that governments will start trying to ban existing cryptocurrencies in favour of a centralised version (Central Bank Digital Currencies, such as e-krona, Venezuelas Petro and Chinas digital Yuan CDBC; Editors note). We have to obey the laws of each country where we live in. Generally speaking El Salvador’s development is great news as an example.

German Ramirez: I got hired by a large insurance company and given the opportunity to transform it. Rest is history!

Fyggex: For someone interested in financial affairs, it’s not a bad place at all. Zurich being the financial capital of Switzerland and one of the leading hubs in Europe. Would you consider knowledge of the Swiss about Blockchain matters be greater than elsewhere?

German Ramirez: More people in Switzerland know about blockchain than in the average country. Switzerland is ahead, but we want and need worldwide adoption. People may wave national flags, but the idea behind cryptocurrencies needs to be detached from that. The fact we’re discussing countries proves that the humanity isn’t ready to embrace the principle where economies can be separated from borders.

Fyggex: As a Swiss resident, you must be familiar with the Zug ‘Crypto Valley’ projects?

German Ramirez: Yes, many crypto banks are springing out of Zug. And the very fact that entirely new banks were created, shows how conservative the traditional banking industry was and is.  If the big banks of Switzerland had embraced cryptocurrency, it wouldn’t have been necessary – or even possible – for these new crypto banks to start.

Fyggex: With that in mind, do you think organisations maturity level is more important than that of countries, concerning world wide blockchain adoptation?

German Ramirez: The European Union is investing in research, using taxpayer money, around digital Euro. Ultimately it must be done on an individual level. The drivers will be us. You have visible players like Elon Musk, but it’s not about political leaders or influencers, adoption is about individuals.

Fyggex: How do you think the masses get the message out there?

German Ramirez: It’s more a matter of having ambassadors, rather than leaders. Elon Musk can influence the price of the entire crypto market, and that’s something I’d like us to stay away from. There will be thought leaders, but they should share their knowledge rather than influence things.

Fyggex: Some criticize Blockchain as a white male dominated space. How do you see women’s activity or inactivity within this area?

German Ramirez: The internet developers were mostly young males, and that’s stuck around. Though I hope Satoshi Nakamoto is a woman. For some reason, everybody seems to think it’s a man, and that gives you an idea of how we’re wired. In my opinion, it is not a question of exclusion, it is just a matter of what you’re interested in.

Fyggex: OK. But there were women in tech, and now their numbers are declining. Some say they avoid Blockchain events as those are so chauvinist. Do you think women are scared away?

German Ramirez: Why are we so obsessed with gender? For some reason we want to have 50 per cent of everything, everywhere. Actually, within our company we have seven women and six men.

Fyggex:  That is progressive, and good point. How about other challenges the blockchain industry is facing, how do you see the situation?

German Ramirez: First of all, there’s the fear of the unknown. Large companies love to experiment with blockchain, but there is a fear factor because it’s relatively new. Secondly, there are still technological limitations with blockchains.

It is important to remember that, in the beginning, the internet was slow. People didn’t give up, and the internet became faster. It’s the same with blockchain. I’ve no doubt the issues will be resolved, and there are some really interesting protocols coming out that address that matter.

Finally, there are philosophical worries about losing centralisation. Meta (Facebook), for example, built its model around centralisation and control of data. There are many incentives not to mess with the status quo, and the more power and wealth you hold, the less you want things to change. However, by default, more power and wealth you hold, the more you can change things. This paradox here is where the struggle is.

Fyggex:  The ecological impact of blockchain has been much discussed. Do you see things improving?

German Ramirez: Bitcoin is power hungry, not blockchain. People tend to confuse these two. There are consensus mechanisms that require power, and there are solutions coming out that leave little or no impact on the environment. We must remember that the first cars that came out were also polluting, now today even gas cars are better. It’s the same with blockchain. Things will improve, and to suggest we should give up on blockchain for ecological reasons is wrong.

Fyggex: Why do you think some people still confuse Bitcoin and blockchain?

German Ramirez: Because Bitcoin became recognized globally first, and there’s a lot of talk of Bitcoin price. One needs the another, but they are different. Bitcoin is the most tangible, greed-feeding way in. Early on, I suggested naming an association the ‘Blockchain Association Switzerland’. The president said: “Do a Google search”. I did, and it was obvious people would find us easier if we were called the ‘Bitcoin Association Switzerland’ instead.

Fyggex: Finally, do you think that blockchain a craze will eventually die out?

Fyggex: Thank you for your inspiring contribution, German, it was great to have you with us!

0Shares
Previous PostWill Uniswap break over the $31 resistance level?Next PostBitcoin city. What is it?